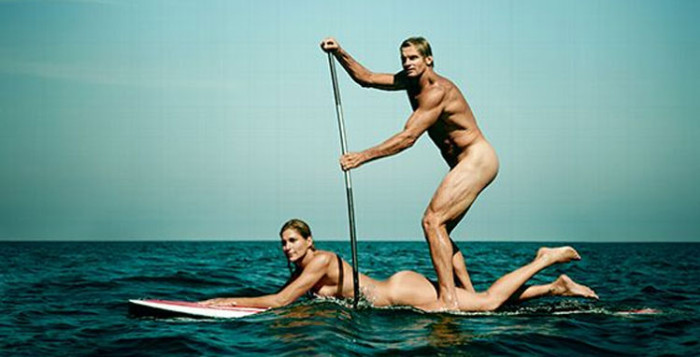 July was a big month for the world of surfing.

In case you were busy, here’s a quick rundown of what happened.

Laird Hamilton Gets Naked for ESPN

ESPN knows that sex sells, and that’s why they started their annual Body Issue.

This year you can find the godfather of SUP himself, Laird Hamilton, along with his volleyball wife Gabby Reece, SUPing without any clothes.

I wonder how many times they SUP’d naked before ESPN ever approached them about it?

Kelly Slater’s new brand Outerknown was finally officially launched, after much anticipation from the surf community.

But I don’t think many surfers will be wearing any Outerknown pieces… a flannel will cost you $165 or more! During the final heat of the J-Bay Open, a shark got a little frisky with Mick Fanning.

And Mick got a little frisky with the shark, as you can see from these memes.

Another Shark Attack at Renunion Island

Just days after Mick’s attack, there was yet another shark attack at Reunion Island.

Thankfully it wasn’t fatal this time, but it is the 18th shark attack since 2011 at Reunion.

A man named Rudolph was attacked while paddling through the channel. He suffered deep wounds to his arm, but all body parts are still intact and attached.

Can we please find a shark deterrent that works? The Quest 1 mysteriously sunk in the Mentawais.

Luckily everyone onboard was ok, but some say the boat was valued at over $1 million. Not a good month for Rip Curl!

JOB Set Himself On Fire Redbull and Jamie O Brien keep pushing the limit with their Youtube series Who Is JOB?

The same XXL swell that JOB surfed on fire at Teahupoo, but here’s the edit with more surfing, less Jackass:

Vans US Open in Huntington Beach As far as spectators, the US Open of Surfing in Huntington Beach is the biggest contest every year.

The contest wraps up on Sunday, so you still have time to check it out if you’re in the area!