Another great board from Proctor.

The tail on Da Monsta is wider than a normal shortboard, but it’s not so wide that it would push you too fast and make you miss sections. Instead, it’s designed to keep you at pace with the pocket of the wave.

Check out Nick Rozsa tearing it up on Da Monsta:

The rocker of Da Monsta is continuous, with no extreme flips up in the nose or tail.

Single concave across the bottom of the entire board tells us that this board is probably good for surfing waves with some punch to them.

If you’re an intermediate to advanced surfer, you’ll probably really like Da Monsta in 4-6ft fair to good waves. 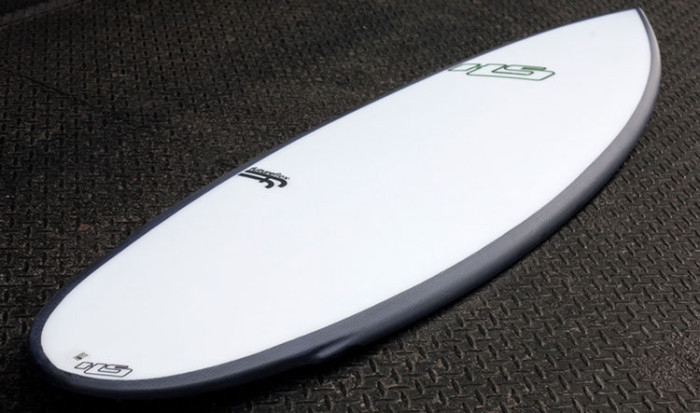 The rail lines on the Shred Sled are more parallel than usual, which means we can get more volume in a shorter length.

Take a look at Creed McTaggart shredding his Shred Sled with ease:

There is a little wing in the tail, to make the board easier to control.

The Shred Sled can be really fun in 4-7 foot waves, but of course it can handle a wider range than that.

The Lil Rascal is a really old model, but just in case you’re interested, here’s some info about it.

But first, watch Jay Phillips on this board, messing with all the longboarders at Malibu:

END_OF_DOCUMENT_TOKEN_TO_BE_REPLACED 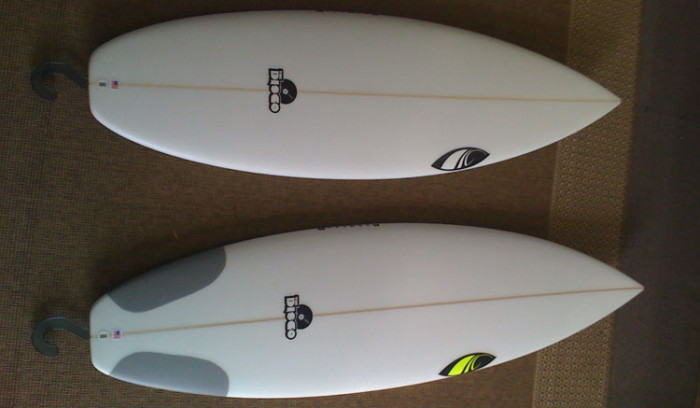 You should surf the Disco probably 4-6 inches shorter than a standard shortboard, and that might scare some surfers.

A lot of times, a beginner surfer or one who weighs a little bit more, will look at a board like this and be scared to go shorter. They think they are giving up too much float. A lot of surfers make the mistake of ordering a board longer than they are supposed to, to get more volume in the board. But here’s the problem with that: a lot of shapers design special rocker profiles for the surfboards that they create, and the Disco is an excellent example of that.

Watch Evan Thompson putting the board to good use in some really lackluster waves. This guy knows how to dance the Disco:

There’s a lot of single concave on the underside, but the Disco gets away with it because of the amount of rocker it also has. This concave helps the board plane easier.

The Disco could be a good choice for waist-shoulder-head high waves, even if they have a little punch to them.

The Proctor G4E Plus might look a little different than other surfboards you’ve seen… and it is.

With its new method of construction, it is incredibly durable, but also very pricey. Like $1000+.

END_OF_DOCUMENT_TOKEN_TO_BE_REPLACED

Low T is a bad thing for guys, but the T-Low is a great thing for everyone.

This board has been around for a few years, but it was one of the most popular Channel Islands boards for a while.

The rails on the T-Low are very pinched and tapered down, and thinner than average.

The single concave to flat out the back, tells us that this board is designed for pretty good waves, but not perfect barreling waves.

The squash tail means there will be a little less “bite” in the waves, but it’s not super wide so it won’t be too loose.

You might want to surf the T-Low if you’re a pretty good surfer, and you want to surf beachbreaks that aren’t super punchy, but still give you some faces to throw turns on. 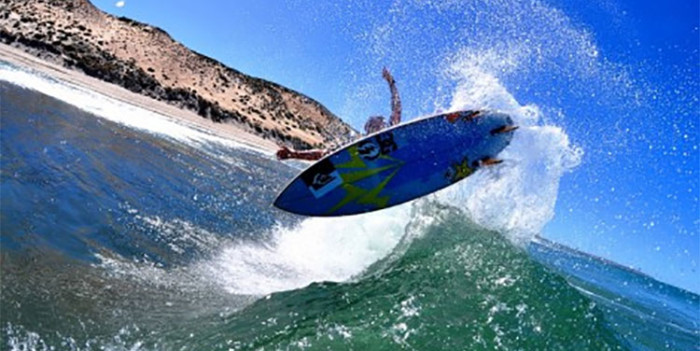 Very forgiving, very user friendly, and a great board overall.

The mellow nose rocket makes this board better for down-the-line speed and paddle power, while a solid amount of tail rocker keeps it maneuvering tightly. Perfect for chunky beachbreaks!

The diamond tail shortens the rail line, which is going to make directional changes a tiny bit quicker.

The Vapors is responsive and fast, just a great all-around shortboard. Pop in a set of quad fins for smaller surf, or set up your thrusters for a head high day in messy beachbreaks. Have fun with it! 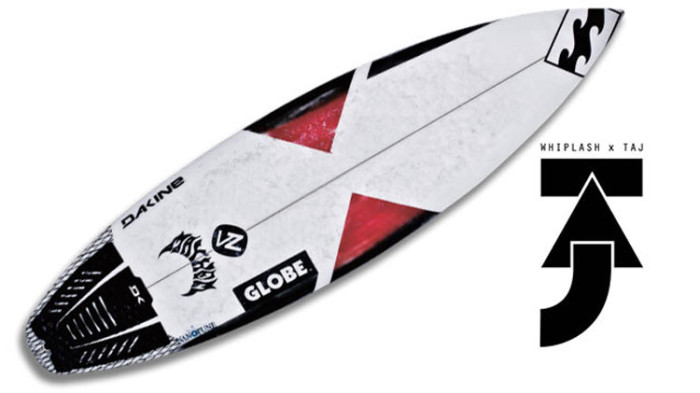 You might have heard that volume and rocker are the 2 most important things in a surfboard.

The Whiplash has a lot of rocker. Rocker slows down your surfboard as it moves across the water. But it’s necessary to have rocker if you want to fit in the wave and arcing turns.

It’s not very wide, which makes it more responsive and easier to get from rail to rail. The rails don’t have a lot of volume, so it’s easier to sink the rail and really dig into your turns.

Take a look at Taj Burrow going nuts on his Whiplash:

The Whiplash is generally good for punchy waves with juice, in the 2-8ft range.

Get ready to slay some big waves with this board!

Watch Nate Yeomans do just that, and listen to his thoughts about the board:

The front of the Slayer gives plenty of paddle power.

The thumbtail on the Slayer gives us wide, arcing turns, and the V in the tail makes it even easier to rock from rail to rail.

This board is great for someone who wants to surf a big, lined up wave, and isn’t too concerned about doing the craziest turn or maneuver. For example, Josh Kerr has surfed this board at Pipeline and Teahupoo. Of course I know most people will never surf those spots, but that’s just to show you what the Slayer can slay.

Blowfish is a good name for this board, because it looks nice and bloated like a puffed up blowfish.

The domed deck on this board helps apply leverage to the rails when surfing.

It’s a very wide board which lets us surf it a little bit shorter, with the widest point being a bit towards the nose.

The bottom of this board starts with a single concave up by the nose, and works into a V by the fins.

So if you’re looking to do some flowy surfing on average waves, you might want to give the Blowfish a whirl!