Daggers cut, and this board will cut through any weak mushy surf and make it fun!

The flat deck tells us the Dagger has a good amount of volume. You’ll notice the down-rails as the flat deck angles down to thin out the rail lines. With less volume in the rails, they will be easier to sink when you do a big turn. (If you’re a beginner, you probably don’t want rails this sensitive)

Medium nose rocker keeps the board easy to paddle, while the V and double concave in the tail keep the board loose.

So if you have a laid-back, flat faced wave you like to surf, the Dagger could slice it up anywhere from waist high to overhead. 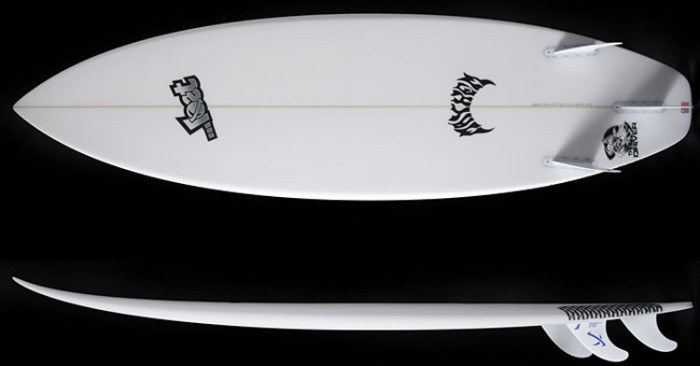 The …Lost Driver is an older board, but it was a very popular high-performance shortboard, and it still is today.

Check out this video of Cory Lopez driving his Driver through some right points… you need to watch the last barrel in this vid!

Some people think nose rocker is there so you don’t dig the nose into the wave when you drop in, aka pearling, but it does more than that. It helps us turn, and pump up the face of the wave, because the rocker outline fits into the shape of the wave. The Driver has a good amount of nose rocker, because it’s meant for performance surfing.

There’s a lot of single concave in the bottom, which tells us that it’s probably best surfed in decent-good waves.

What was SUPERbrand thinking when they came up with this name? This board is the opposite of slow like a slug. I guess maybe it looks like a slug? It’s definitely meant to be ridden on sluggish waves, so maybe that’s where the name came from.

Check out Clay Marzo making it look easy in some baby waves on Maui:

The first thing you might notice about the Slug is the hip in the tail. This is done so the width of the tail can be a lot thinner than the width of the board. The hip also adds pivot to the board, and you can see Clay pivot some 360s in the video above.

Low rocker + lots of width = a great board for smaller or mushier waves.

Here’s another board from the young Taz Yassin.

The Speedball has a bit more width forward and a rounded nose, which equals much easier paddling than a standard shortboard. It also has a squashed off, wider tail, which helps it plane in weaker waves under chest high.

Here’s a little POV of someone surfing the Speedball:

When you surf this board, the first thing you notice is that it does not feel excessively wide. A lot of boards with this kind of shape, with a rounded nose and a wide forward area, can feel like you’re surfing an aircraft carrier. But the Speedball keeps a very curvy tail rocker, and it breaks up the outline nicely with some wings on the tail.

These things give the board a lot of responsiveness, and make the board feel much shorter and narrower when you surf it.

The TAZ Speedball is really fun on the sort of days that look a little bit fun, not bad, but certainly don’t look good… when you really need a fun shape to get you hyped to paddle out, this is a sure bet.

This is another odd shape, but everyone needs a little weirdness in their life!

Look closely, and you’ll see that this board doesn’t have any concave on the bottom of it. Instead, it has convex, a gentle curve from rail to rail. This makes it easier to transition from one rail to the other in turns, with a nice flow.

When the bottom convex meets the tail rocker, it provides a kind of all-around pivot point for the board.

There is a ton of volume packed into the Nugget, but a lot of it is in the back end of the board, which helps you keep it under control.

This board probably shines most in bigger waves about shoulder high to double overhead, and for surfers who want ultimate control and high volume paddling.

Simon Anderson is best known for inventing the thruster. But he didn’t stop there. He’s still shaping away, and doing a damn good job of it!

The Face Dancer has single concave throughout the whole board, until it goes to V under the thruster box. This V helps you connect your turns in a more fluid way when riding the board as a quad.

There’s not much flip in the tail rocker, which means this board puts an emphasis on drive and speed through turns, not pivot in the lip.

It’s made with epoxy, which means it’s a lot lighter than a fiberglassed board. It’s so light that it can float over crumbly sections really easily, and also deals with whitewater really well because it’s so buoyant.

However, some would say the downside of the weight of this board is that it doesn’t deal with chop on the water that well.

The rails on this model are thin enough to allow you do really dig into your turns and sink the rail. (Dancing on faces… see why it’s named that?)

It’s a great option for intermediate to advanced surfers for pretty good waves that are waist to a few feet overhead.

The Roberts Mutant the board for slopey waves under neck high.

It’s definitely floaty, but you can still probably bury a rail and surf “in the wave” instead of “on top of the wave”

When you surf this board, you’ll probably find that the tail is a little bit too wide to go really good as a 3-fin, but you do have the option with a 5-box setup.

In a weak reef break, the width and double concave of this board will allow you to draw out your bottom turns or hang out in the whitewater while you wait for the next section to wall up again. Then, the pinched rail and the swallow tail will provide responsiveness and hold through the good sections.

At a funky beach break, this board will help you be competitive with longboarders on the outside because of how wide the board is. Then you can set yourself up for your inside closeout section, where your board will be responsive because of the pinched rail.

The Black Moon is a beautifully designed board overall. You might notice that nothing really stands out about the board, but it is designed very nicely.

END_OF_DOCUMENT_TOKEN_TO_BE_REPLACED

The biggest change from the original White Diamond to the White Diamond 2, is the concaves. Single concave turns into double concave towards the back of the board, with some V at the very end.

On a board like this, the double concave will help you get a quicker response out of the tail of the board, when you shift weight on your back foot. And it helps the tail slide around easier, keeping it from sticking to flat spots in small weak waves.

This is Torrey Meister killing it in smaller waves at Black’s on a White Diamond 2:

The White Diamond 2 has about 1 liter less volume than the original White Diamond of comparable dimensions. This represents a move towards a bit more high performance pocket and lip surfing.

Adding further to this board’s performance is a slightly narrower and more foiled out nose. The bottom edge of the nose rails are also beveled to eliminate catching an edge when turning back down into the face of a wave.

You might really like the White Diamond 2 for more pivot in the pocket, and release off the lip.

Most advanced surfers would really like this board in about 2-5 foot waves, while more average surfers might prefer the original White Diamond in the same conditions.

The most noticeable thing about the Proctor Apache is its concave deck. This means that if you lay the board flat, the middle stringer is lower than the outer rails. You definitely don’t see that on many other surfboards!

It’s like this board gets its inspiration from skateboard decks.

Here’s a breakdown from the shaper himself, Todd Proctor:

When you remove foam from the deck for a concave like this, it brings your feet closer to the water than a flat or convex deck would.

Some surfers say paddling on a board like this is easier because your chest and stomach fit on the board better. Others say a concave deck is easier to balance on. And many surfers say this type of board gives you a feeling of “one-ness” with the wave.

But the concave deck isn’t the only interesting thing about the Apache. It also has channels on the bottom of the tail.

Also, when a channel is straight, that makes the board want to go straight. The Apache channels are really unique because they are curved and shallow. The curve means that the board can actually maneuver, and do things other than go straight. And the shallow depth of the channels means the board won’t completely shut down when the conditions get messy.

What all that means is that this board is abnormally versatile when you compare it to other boards with channels that only work when the waves are good and glassy.

To add to the list of un-normal things with this board, you’ll also find step-rails towards the rear. This produces long arcing turns, but allows you to break loose if you push it hard enough.

It’s a great board for turns and speed in waves that are anywhere from ankle to shoulder high. Plus, it’s definitely a more “exotic” board, and sure to be a conversation starter! (If you’re into that)