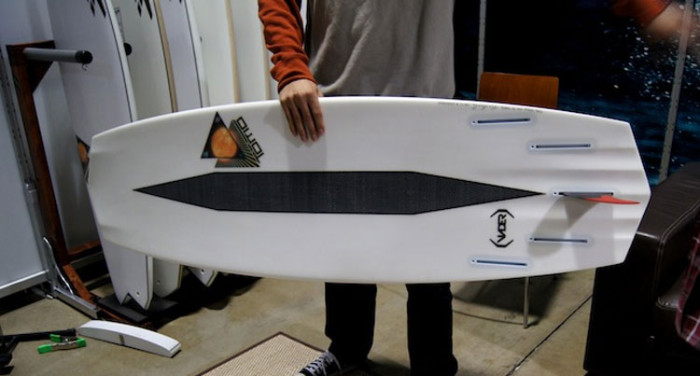 Stu Kennedy has been the main evangelist for the Firewire Vanguard, and here’s a video of him surfing it with the designer, Daniel “Tomo” Thomson:

Now because these parallel rails help the board have such a fat tail and nose, they help take width away from the center of the board. That decreased center width can make it easier to crank the board around turns.

The parallel rails also allow the Vanguard to be much shorter than a normal shortboard, which definitely helps with maneuverability.

The Vanguard has a very deep single concave, which acts as an engine to the parallel rails, giving the board lift and a ton of speed.

To add to the weirdness, you have to get used to the boxy rails with hard edges.

The nose of the board has some channels in it, which helps keep the nose lifted when dropping in. Without the channel, the Vanguard would be more likely to pearl.

You will notice a bigger channel on the tail of the board, which gives the board just the right amount of control. The double diamond tail gives a bit of hold in the wave.

With this board, you can probably use a smaller set of fins than you normally surf.

You’ll probably find that the Vanguard is most fun on a lined up wave that is head high to a few feet overhead, because of the way you can race and beat sections on this board. Or you might find it fun on smaller waves, because you can set your weight on your back foot, and plane forward on a smaller weaker wave.

You don’t really pump this board to get speed, you just set and let the hull plane for you to give you all the speed that you need.