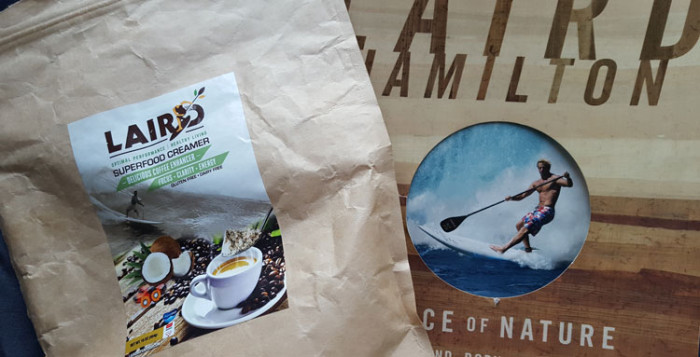 I’m actually sipping on some right now, as I write this.

But it’s really about that early morning coffee, heating you up and stimulating your mind and body while you check the waves in the chilly morning air.

I’ve been cutting sugar, dairy and artificial crap out of my diet, so Laird’s Superfood Creamer was a pretty interesting find for me.

Plain black coffee doesn’t taste very good. You get used to it after a while, but it’s nice to switch it up.

Luckily the Superfood Creamer only has 2 grams of sugar, no dairy, and no preservatives or artificial junk.

Dried Milk Powder (coconut, maltodextrin, sodium caseinate [a milk derivative])
I’m not sure how they call this “dairy free”, when sodium caseinate is derived from milk. Seems contradicting to me…
Other than that, coconut is great.

*** After publishing this post, we received the following message from the Laird Superfood team:
“Due to a few people who have contacted us displeased with the Caseine, as of last week we have removed that from the product and are shipping Caseine free. We were able to have a Coconut milk powder made that doesn’t use it, and is creamier and even more delicious.”

Organic Coconut Sugar
This natural sweetener is made from the nectar of the blossoms of the coconut tree which provides a palatable light nutty flavor. The Laird Superfood website claims it is the “world’s healthiest sweetener”. It’s not very sweet, but definitely better than plain black coffee. They recommend buying their “Superfood Sweetener” if you want a sweeter taste.

If you don’t like the taste of coconut, don’t waste your money on this creamer. Dried coconut milk powder is the #1 ingredient, and yes you will taste it. This is probably the biggest drawback of the Superfood Creamer. It’s tough to mix.

I’ve only used a spoon to mix mine, but they sell a “hand blender”, and I’m sure a Magic Bullet type blender would be perfect.

A few unmixed “chunks” here and there, but nothing crazy.