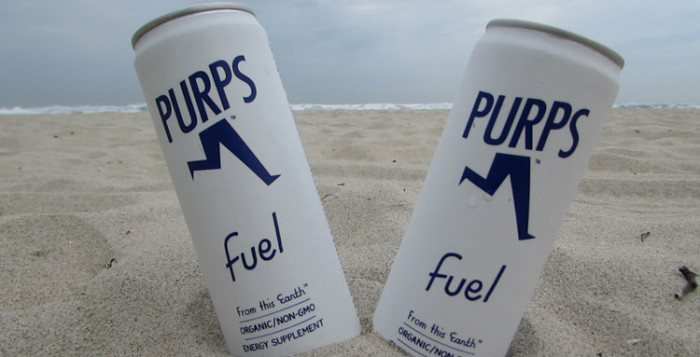 Kelly Slater has been a part of many projects/companies, and Purps is one of those companies.

He started the company about a year ago, with two other partners, PM Tenore and Dr. Chris Schaumburg.

There are three different products in the Purps lineup – Fuel, Hydro, and Vita.
I will be reviewing Fuel, which is basically a healthier version of Monster or Redbull.

It’s not really a surfing product, but since it comes from the mind (or wallet) of Kelly Slater, I thought I’d try it out.

The drink features six purple superfruits: Mangosteen, Maqui Berry, Acai Berry, Blueberry, Grape, Blackberry.
(Although there is only 2000mg of the superfruit blend in each can)

The ingredients are organic/non-GMO, there are no preservatives, and you won’t find any artificial colors or flavors in Purps Fuel.

Purps Fuel has 15 grams of sugar, which is still quite a bit, but not compared to the 39+ grams you would find in a Redbull. I should admit, I really don’t like the taste of any energy drinks I’ve tried.

So the grapey flavor of Purps, with the mild carbonation, really didn’t appeal to me.

It is pretty mild though, so definitely not “gross” tasting. Just not good.

Purps Fuel has 120mg caffeine, which is pretty much the same as a similar sized (12oz) Redbull or Monster.

It’s about the same amount of caffeine as 1 or 2 cups of coffee. Nothing crazy, so don’t expect a ton of energy from drinking one can.

With each can ringing in around $4, it’s really hard to justify the price. I think Redbull is $1.50 or $2 here in California.

I’m glad I tried it (because I’m a Kelly fanboy), but I’m going to stick to my plain black coffee.

That’s what surfers are supposed to drink anyways, right?