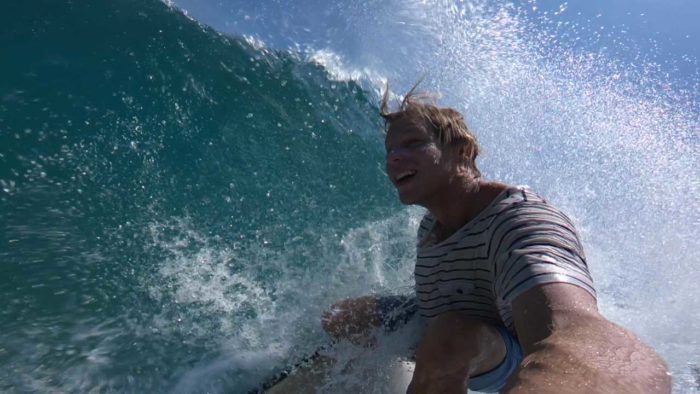 A lot of pro surfers have been dropping edits from Salina Cruz in 2019, and I think most of them stayed with Cesar at Casa Mirador surf camp.

Stab even tackled The Dock 2.0 there (check the credits at the end for the Casa Mirador shoutout)

It’s really no surprise everyone chooses to stay with Cesar… he kinda seems like the mayor of the town.

Casa Mirador is perched atop the highest hill, overlooking all of Salina Cruz.
Beachbreaks to the left, pointbreak (can’t remember which one) to the right

He has the nicest trucks for the surf guides, and you truly feel like a VIP when staying there.

Now, I haven’t stayed at any of the other surf camps, so I guess I’m kind of biased, but I think I’m being fair ?‍♂️

Here’s the video version of my Casa Mirador review, check it out and then I’ll get into more details below.

The beauty of staying at Casa Mirador is that everything is taken care of for you.

Airport transfer, meals, transportation to the surf spots, anything you need.

So all you have to think about is surfing.

Getting to Casa Mirador

We live in San Diego, so we flew out of Tijuana to save money on flights. Our flights were $330 round trip with Interjet.

There is something called CBX (Cross Border Xpress), where you get dropped off just outside the border, and walk across to the airport. It costs $30 round trip.

And the thing every surfer fears… surfboard baggage fees…

We didn’t pay a penny to bring our surfboards with Interjet! Thought it was going to be $30 each way, but it was completely free.

After landing in Huatulco, we had a van taxi waiting to take us 2.5 hours to Casa Mirador. This cost $160, so $32 per person (5 of us). We also paid this when we left the camp, for our departure back to San Diego.

The five of us shared one room. I think there are 4 or 5 total rooms. There were one or two other surf groups there at the same time as us.

In Mexico and other central American countries, the trend is to *not* flush your toilet paper, and it can clog the septic system.

You need to put toilet paper in the wastebasket next to the toilet… this was super weird to me at first ?

The downtsairs living room area is where you can store your boards and hang out.

We found a guitar and Josh serenaded us while sitting in the window ?

The window has the same view as upstairs, beachbreaks to the left and pointbreak to the right.

Upstairs has ping pong and pool tables, and is where we ate our dinners.

The fridge has beers, drinks, and snacks. Just take what you want, and write it in the log, and you pay for it at the end of your trip.

There is WiFi at the Casa, but it was pretty spotty during our stay. The modem broke at one point, and they were working on getting it fixed… not a huge deal for most people, but when I’m trying to run my business remotely, it’s a big thing for me.

3 meals a day are included with your Casa Mirador package.

The breakfast is pretty weak (cereal and fruit), and usually lunch is just PB&J sandwhiches and/or tuna sandwhiches

We could choose to come back to the casa for lunch, but since the spots are an hour drive away, usually we just stay and surf all day.

A couple times we actually bought some fresh fish from the locals and made ceviche for lunch at the beach.

Dinner is where it’s at

I’m a plain eater, so basically all I want is meat and rice haha, but the kitchen staff always whips up some bomb dinners.

Casa Mirador is different from other surf camps you might visit, because no surf spots are walkable here.

Each evening, you coordinate with your surf guide what time you want to leave in the morning. You meet in the morning and he tells you which spot(s) should be working, and you go from there.

Load up the truck with boards, canopy for shade, chairs, and food (usually just PB & J, bread, and tuna).

Usually we leave around sunrise, and stay out until 3-5pm.

There are palapas at certain surf spots, otherwise the surf guide will set up a canopy for sun protection. It gets HOT here folks.

What I Packed for Salina Cruz

So was it worth spending $1,319 for this Salina Cruz surf trip?

Unfortunately the waves weren’t as big as we had hoped… we wanted some head high barrels, but we mostly got 3 foot mushy slow waves.

It was still super fun with the boys, but I think we’ll wait and check the 2-week forecast before booking our next trip, if possible.

If you decide to go with Casa Mirador, tell Cesar Ho Stevie! sent you ?