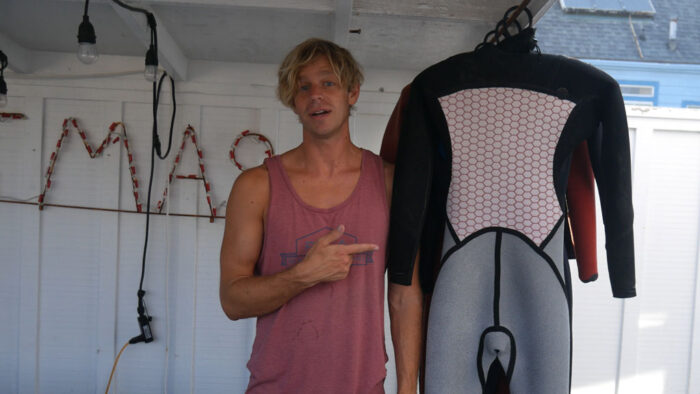 It’s fun to try new wetsuits, and this Imperial Motion Lux Premier 4/3 fullsuit is a winner.

I actually got this wetsuit in January, but I’ve had to wear it in August and September because San Diego water temperatures are fluctuating like crazy.

So I’ve put it through probably 5 months total of almost daily use. And guess what… the Lux Premier wetsuit still looks brand new.

No holes, rips, or deteriorating seams.

And the best part? The price.

Currently it’s $120 on Imperial Motion’s website, but it’s also sold out, and I don’t know if that’s some sort of promotional price.

So we’ll see what the price is for the new models of wetsuits.

The new wetsuits still don’t come with a key pocket / key loop, my only complaint about the Imperial Motion Lux Premier wetsuit.

It can’t cost that much to add a key pocket, right!?

Almost all wetsuits have a key loop in the neck area, or a key pocket somewhere on the leg.

It makes it really inconvenient if you have to drive to your surf spot… and then figure out where to put your key.

So I usually just wear the Lux Premier wetsuit when I surf by my house.

(JJ did say they might make this revision in their next run of wetsuits, because other people have requested it as well)

Everything else about this wetsuit is perfect!

It keeps me warm, and I’m a baby with cold water. Water temps in San Diego are mid to upper 50’s in winter.

They use a limestone based neoprene (instead of petroleum based) which is apparently better for the environment, and I’m all about that.

The Lux Premier wetsuit honestly feels just as good as my $500 Xcel wetsuit, for half the price.

So I’m happy to say, I won’t need to buy a new wetsuit this winter ?

I’m keeping the Lux Premier hanging up and ready for action ?‍♂️