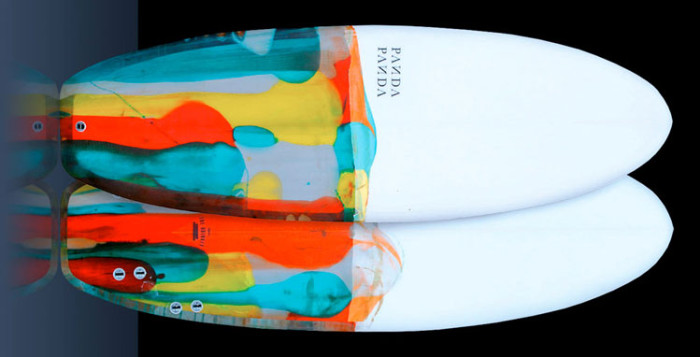 There’s nothing like doinkin’ around on some garbage summer waves, right? The Panda Doinker is here to help you do just that.

The deck is actually an S-deck. Basically think of a letter S, and then rotate it 90 degrees. There is a very subtle S shape on the deck of the Doinker.

This removes foam from the nose, and tapers out the tail. It puts the bulk of the foam under your feet, where you need it, and it allows the nose and tail to be more maneuverable.

The rolled V under the nose help the board go from rail to rail, and helps displace water a bit as it plows through.

When looking at the rails, you’ll notice very obvious down-rails. This means that the top half of the rails have a pretty extreme downward angle from the flat deck. This takes volume out of the rails, so you can sink them better when turning. If the Doinker didn’t have down-rails like this, it would be very good at planing forward, but not as much maneuverability.

The Doinker has an incredibly flat rocker, with a slight increase in the tail rocker.

This is a really cool chunker that surfs a lot like a shortboard, but has crazy paddle power. It’s great for anyone from beginner to advanced, and can be surfed in waves up to head high, but preferably more laid back slopey waves.